You know those days where you feel like God is just laughing up there with a bowl of popcorn while He watches you? Yeah that was my day Tuesday. My car, Lady Liberty (the Jeep Liberty) officially bit the dust. After the endless amounts of money I put into it (Which I regret because I should have just bought a new car instead of pouring money into fixing my old one.) This was one of those situations where everything bad that could happen, happened. So for starters my car just shut off, in the middle of the road. Luckily a nice man helped me push it to a safe spot where I could call the tow company. To top things off the tow truck company took 3.5 hours to pick me up. As I’m sitting here waiting on the side of the road a lot of life lessons occurred. Here are just a few… 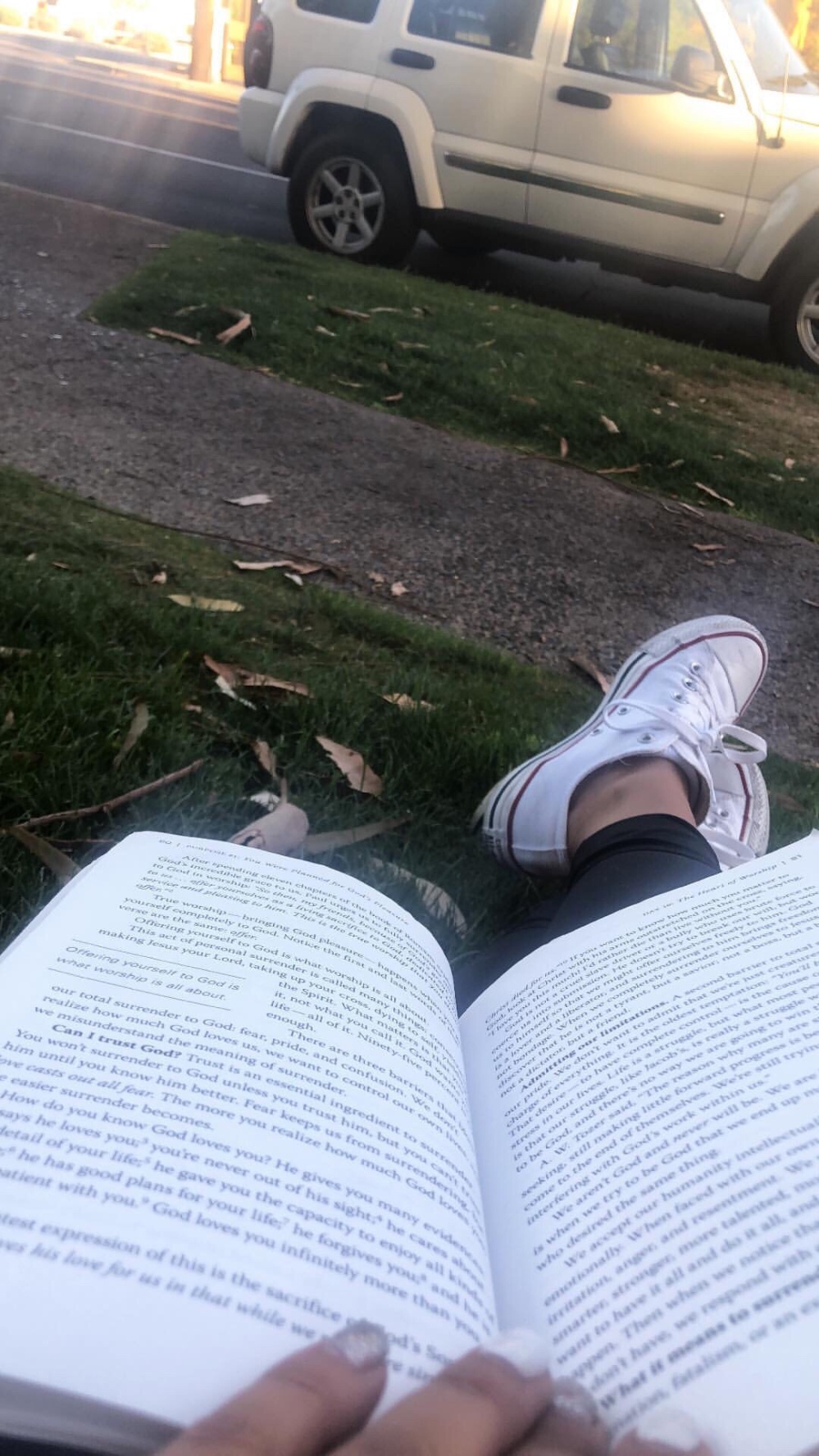 1. God was calling out to get my attention.

I’ve recently started a new book called, “The Purpose Driven Life” if you haven’t read it I would highly recommend. It’s a daily devotion that you read through and by the end of 40 days you will have a better understanding of what purpose Christ has for your life. Well I slacked off this week and missed a day or two. So as i’m sitting there on the side of the road I decide to pull out my book and do that days devotion. Where God was truly speaking to me….

The chapter I read there spoke about “Surrendering to God.” For so long I was holding on to my old car. I kept investing money into it, in hopes that it would magically be like new and I would get to keep it another 5 years. Instead it left me on the side of the road next to a dumpster and a sketchy Starbucks. What I should have done 5 months ago was surrender to just throwing in the towel and selling my car and buying a new one. Now I’m left with a car that is worth ZERO dollars and no new car. Life is kind of like that too. When we don’t fully surrender to God we get left with NOTHING. When we tell God, “I have this I can keep going without your help” We end up down the road saying, “WAIT! I NEED HELP!” And sometimes then it’s too late. The author of the book says clearly, “When we don’t surrender to Christ, We surrender to chaos.” WOW, ain’t that the truth. My day was full of chaos all because of a few decision I made (or rather didn’t make) a few months prior. In that moment I set my book down and said out loud, because at that point I didn’t care who thought I was crazy, “God, I am surrendering to you. Take my life. I obviously can’t control it myself. I am giving you the steering wheel.”

3. I learned not to judge a book by its cover.

I’m the kind of person who really truly wants to believe there are more good people in the world than bad. Unfortunately that is not always the case. As I sat there hoping somebody nice would come help me only 3 people did stop. A landscaper, a young man, and….a man on a bike. The man on the bike was who struck me the most. He road up and asked if I was okay and offered to look at my car. He then told me how he was struggling financially and had to resort to using a bike to get from place to place. We bonded and laughed over the fact that cars are expensive and life is hard. He then parted ways when I told him my tow truck would soon appear. About 2.5 hours went by and my tow truck had still not appeared. As I sat there he walked up, this time with a girl, and said “Oh My gosh! You are still here?! Well I’m not leaving you until I know you are safe and the tow truck has come.” Wow, this man had NOTHING to offer me but his time and company. He knew the part of town we were in was not safe for a young girl so him and this woman stayed with me for an entire hour until my tow truck came. Gosh, to be honest, if I saw this man walking on the street any other day I would have avoided him at all cost. He wasn’t clean, he was smoking, he had a beat up bike, and ragged clothing. But today I needed him (Funny how God humbles us like that).So I said a quick prayer, “God use me to minister to this man and his friend.” And THAT HE DID! Both of them were amazed how cool, calm, and collected I was after waiting almost 3.5 hours for a tow truck in the middle of the road. They asked me, “How are you so patient!?” Which I said, “Jesus! I’m so blessed I have nothing to be truly mad about. And it could be 120 degrees right now but it isn’t!” We got to talking and shared more about our lives and I can honestly say I left a mark somewhere in this man’s life by encouraging him to work hard and get out of a toxic relationship he was in. Not only that, he left an even BIGGER mark on my life just by his love and care. We as humans are SO quick to judge that just because somebody doesn’t have money, a car, or clean clothes that they are bad, druggies, or scary people. In fact it’s quite the opposite. The cars that all ignored me were the Mercedes and BMWS. The ones that helped me were old work trucks and a man on a bike. From that day forward I will always remember that time is worth far more than money. That sometimes people don’t need your money or gifts but rather just your time and your attention. Today I chose to find Joy in a lot of things: 1. I have a job that will help me afford a new car, And it wont be a fancy one but that’s okay because I have everything I could ever want in life. 2. That there are some really incredible people out there. And you wont see them on tv, or dressed in designer clothes, or even living in a house. They might be riding a bike through a dark and scary neighborhood. 3. The way we respond to situations says more about who we are as a person then anything. People are always watching. 4. That I had my book with me! 5. That God set me in the perfect place at the perfect time to teach me a vital life lesson.